Victoria, BC – VicPD Traffic officers are reminding drivers that there are no excuses for driving impaired, particularly on the first night of 2020.

VicPD officers, including members of our Traffic section, Patrol division, Community Services Division and other special duty officers will be out in Victoria and Esquimalt in order to help keep New Year’s Eve safe.

“There is no excuse to get behind the wheel after drinking alcohol or using drugs,” VicPD Traffic Sgt. Ryan O’Neill said. “With many options, including BC Transit, taxis, dial-a-driver and designated drivers there are many ways to get home without putting yourself or anyone else at risk. Plan now to get home safe.” 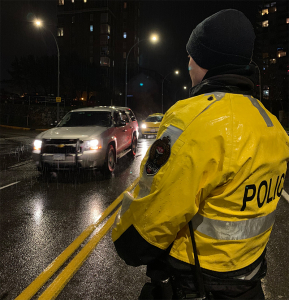 VicPD Traffic officer on the lookout for impaired drivers during the 2019 holiday season.

Officers will be out in force on New Year’s Eve on the lookout for those driving while impaired by alcohol or other drugs. We will be providing ongoing updates on calls for service during our New Years Eve tweet-a-long. Follow #VicPDLive from 3 p.m. onward on December 31st.