The Victoria Police Department was established in 1858 and is the oldest Police department west of the Great Lakes. Our police officers, civilian staff and volunteers proudly serve the City of Victoria and the Township of Esquimalt.

A world-renowned tourist destination, the City of Victoria is located on the southern tip of Vancouver Island. It is the capital of British Columbia and the Township of Esquimalt is the home of the Pacific Fleet of Canada’s Navy.

A Safer Community Together 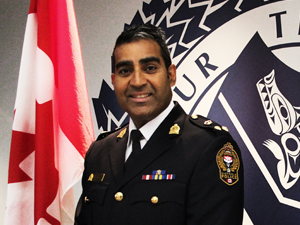 Born and raised in Victoria, Chief Constable Del Manak started his policing career with four years of service with the Vancouver Police Department. He came to VicPD in 1993, where he has served in a variety of sections and roles.

Chief Manak has an extensive traffic safety background. He spent five years in the VicPD Traffic section, where he was a collision analyst and part of the escort and drill team. Selected to set up a provincial government pilot project, Chief Manak helped create the Integrated Road Safety Unit (IRSU) in the Capital Regional District. The success of this pilot program led to the expansion of other IRSU units throughout the province.

Promoted to the rank of Inspector in 2006, Chief Manak served as the Officer In Charge of Human Resources for over 3 years.  He has personally hired more than 60 officers, or nearly one quarter of VicPD’s current members.  He then oversaw the Patrol Division until he was promoted to Deputy Chief Constable in 2010. He was promoted to Chief Constable on July 1st, 2017.

Chief Manak is a graduate of the Dalhousie University Police Leadership Program, the FBI’s National Academy Program, and recently completed a master’s degree at Simon Fraser University in Terrorism, Risk and Security Studies.

Remaining active in the community remains important to Chief Manak.  He is involved in coaching baseball, hockey and soccer and has proudly coached over 30 teams through the years.

Date: Thursday, June 30, 2022 File: 22-14446 Victoria, BC – VicPD officers and staff are looking forward to a safe, fun and family-friendly Canada Day. Officers and volunteer Reserve Constables will be greeting the public to help [...]

Date: Thursday, June 30, 2022 File: 22-23959 Victoria, BC – Patrol officers are asking for your help to locate high-risk missing youth Shirita “Simone” Beans. Shirita who also goes by “Simone”, is described as a 16-year-old Indigenous and Asian [...]

No Injuries After GVERT, Patrol Officers Rescue Person In Crisis From Rooftop