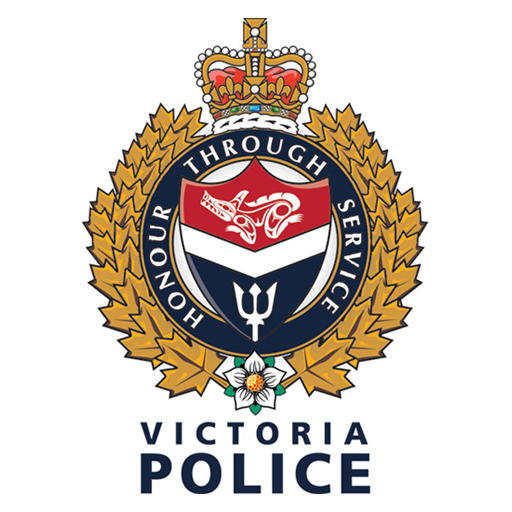 The colours and the chevron are from the arms of the City of Victoria. The depiction of the wolf, based on a design by local artist Butch Dick, honours the region’s original inhabitants. The trident, a maritime symbol, is found in the badge of the Crown Colony of Vancouver Island (1849-1866), the government under which the first Commissioner of Police for Victoria was appointed, as well as in the crest of the District of Esquimalt, which is also in the jurisdiction of the Victoria Police Department.

The cougar, an agile and strong animal, is indigenous to Vancouver Island. The coronet vallary is associated with policing.

Horses are animals used by mounted police officers and were the earliest mode of transportation for police in Victoria.

Our motto reflects our commitment to viewing our policing role as a service to the community, and our belief that there is true honour through service to others.

The shield of the Arms of the Victoria Police Department encircled by an annulus Azure edged and inscribed with the Motto, all within a wreath of maple leaves Or issuant from a Pacific dogwood flower and ensigned by the Royal Crown proper;

Azure the Badge of the Victoria Police Department cantoned by maple leaves, sprigs of Garry oak and camas flowers Or;

This is the standard pattern of a municipal police badge in Canada. The central device and motto indicate local identity, the maple leaves Canada, and the dogwood flower British Columbia. The Royal Crown is a special symbol authorized by The Queen to indicate the role of the Department’s officers to uphold the Crown’s laws.

Garry oaks and camas flowers are found in the Victoria area. 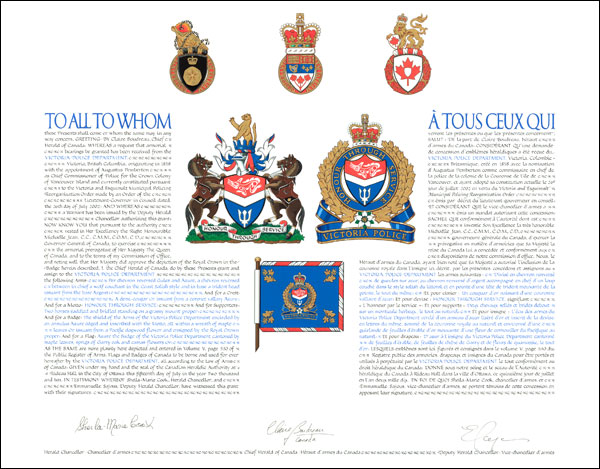