In December of 2019, Ahmad Al Shehab, Al Baraa Al Homsi and Majeed Sultan started their school day like every other day at Victoria High School. However, while they were in the bathroom preparing for their day, they heard the sounds of someone in medical distress in one of the bathroom stalls. The three young men came to the person’s aid.

They discovered a young man in the midst of an opioid overdose in the stall. Ahmad and Majeed stayed and supported the young man, while Al Baraa ran out of the washroom and found school staff. After calling 911, Vice Principal Chris Koutougos, along with teachers Niki Lukat and Greg Pitre pulled the unconscious male from the bathroom stall and, with help from the young men, provided lifesaving medical attention. Together, they were able to revive victim. The young man was transported to hospital by responding BC Emergency Health Services paramedics and recovered.

“The care and concern displayed that day by these three students and the actions the school staff took were truly a team effort, which saved of a young man’s life,” Chief Manak said. “It is my absolute pleasure to present these three young men with our VicPD Civic Service Award.” 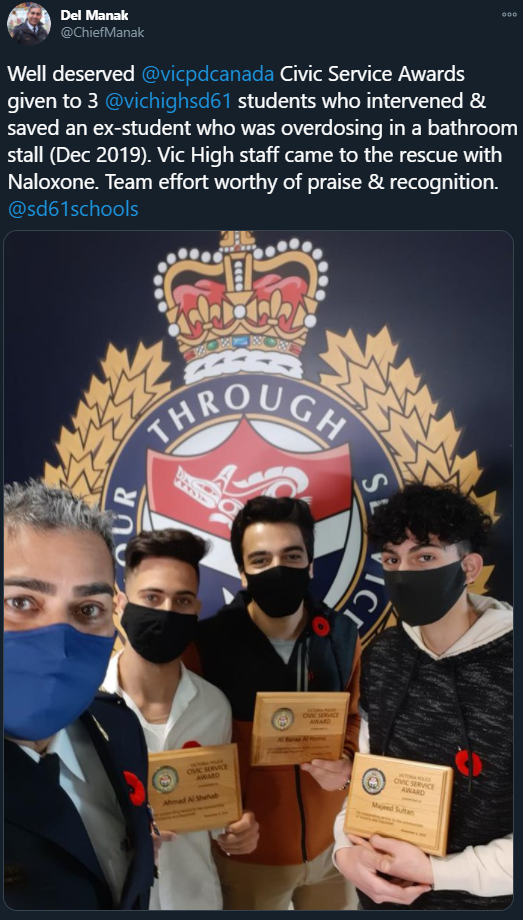 All three young men, along with their families, arrived in Canada from Syria within the last 5 years. “The people of Canada have been good and kind to us,” Ahmad Al Shehab said. “We just did what we think everyone should do when someone needs help.”

The VicPD Civic Service Award was created as a way to quickly recognize community members who have stepped up and done the right thing in our communities. Ahmad Al Shehab, Al Baraa Al Homsi and Majeed Sultan’s names will join the other awardees on the glass in VicPD’s Hall of Honour.