Victoria, BC – Camper, a dog lost after a random, violent attack on Friday, is home safe tonight.

Camper was located this evening by a person walking with their dog on Hollywood Crescent. The owner’s dog located Camper and brought the owner over. The owner took Camper home and called the number on Camper’s collar. Reuniting Owners with Animals Missing (ROAM) helped get Camper home to her family.

ROAM, members of our local media community, VicPD officers, and many concerned Victorians have helped by searching for Camper over the last four days.

Camper, a brown, two year-old female pit bull, had been missing since shortly before 8 p.m. on Friday, June 11th. Patrol officers were called to the 500-block of Pembroke Street at that time for a report that a man had smashed the windows of Camper’s owner’s van with a hammer while she and her dog were inside. The woman and Camper both fled the van in an effort to escape the attack, but became separated. The suspect was arrested by officers, but Camper was not located.

The search for Camper commenced. ROAM posted notices in the area where Camper was last seen, while officers and citizens alike searched for her. 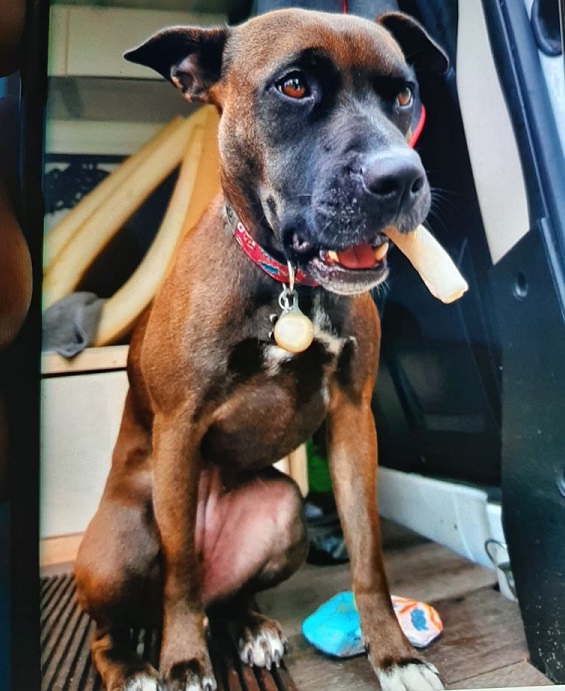 Camper is home safe after a four day search

After his arrest, officers transported the man to VicPD cells. The suspect, a 40-year-old Edmonton man, faces recommended charges of assault with a weapon and mischief. He was later released with a court date and conditions.

While this file remains under investigation, tonight VicPD officers and staff are sharing the relief and joy that comes with knowing Camper is back home, safe.

If you have information about this incident and have not yet spoken to officers, please call the VicPD Report Desk at (250) 995-7654 extension 1. To report what you know anonymously, please call Greater Victoria Crime Stoppers at 1-800-222-8477.