Victoria, BC – Two Victoria men are in custody facing drug, weapons and breach of conditions charges after three Strike Force (SF) operations targeting drug dealers and guns. The investigations were conducted over five months and included three files. They led to the seizure of loaded handguns, modified firearms, body armour, ammunition, and drugs, including fentanyl. 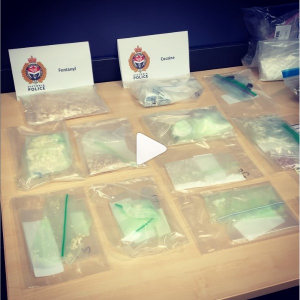 “I am incredibly proud of the excellent work our Strike Force, our Community Services Division, and the Greater Victoria Emergency Response Team are doing to get deadly drugs like fentanyl and guns out of the hands of criminals,” Chief Del Manak said.  “The firearms seized through these efforts, including loaded handguns and an assault-style rifle modified to include a silencer, shows the risk that these individuals pose to our community and the vital need for these types of operations.” 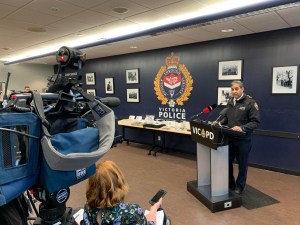 Chief Manak speaks to media about Strike Force’s work that led to the recovery of 6 firearms and $59,000 worth of drugs, including fentanyl.

Working on information from the public, SF officers began an investigation into one of the men in October, 2019. Utilizing a variety of investigative techniques such as covert surveillance, investigators gathered information, including evidence that the suspect was in possession of a firearm. On November 20th, 2019 SF officers, with the assistance of Community Services Division (CSD) and Greater Victoria Emergency Response Team (GVERT) officers, executed a search warrant at a residence in a multi-unit residential building in the 1000-block of Tillicum Road. Two vehicles operated by the suspect were included in the search.

Officers also discovered a loaded 9mm Glock semi-automatic handgun in a false compartment in one of the vehicles.

Officers are recommending six charges including possession of drugs for the purpose of trafficking, possession of stolen property, breach of court-ordered conditions, and possession of a prohibited or restricted weapon. The vehicles are being submitted for consideration for civil forfeiture.

This file is still under investigation and charges have not yet been sworn. 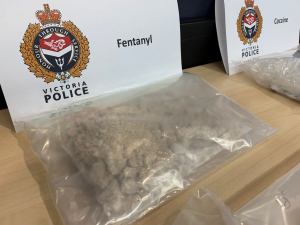 A second Victoria man was arrested and remains in custody after SF and GVERT officers executed search warrants in a drug trafficking and firearms investigation on January 9th, 2020.

Officers arrested the male suspect in the 700-block of Topaz Avenue on January 9th. Officers searched the man and recovered several ounces of fentanyl, cash and a loaded handgun.

GVERT and SF officers then proceeded to a multi-unit residential building in the 2600-block of Cook Street. This location was related to the man arrested earlier that day. A woman who was in the suite was taken into custody without incident. Officers discovered more weapons, ammunition, and additional firearms, including a modified assault-style rifle equipped with a home-made silencer. Several more ounces of fentanyl and other drugs were also discovered.

The execution of an additional search warrant in the 700-block of Topaz Avenue revealed more ammunition and another loaded handgun.

In this file, officers seized four firearms including an air-powered pistol, two loaded handguns and the modified, assault-style rifle with home-made silencer.

Jordan Cody Moreland faces charges for drug possession for the purpose of trafficking as well as several weapons offences. He remains in custody. 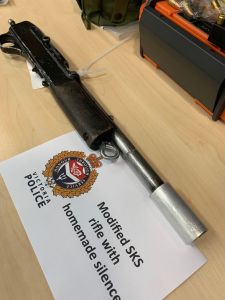 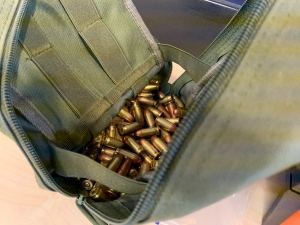 The following day, on January 10th, 2020, working on information from previous investigations and from the public, SF investigators continued an additional investigation into one of the men. Officers again utilized surveillance and other investigative techniques to determine that a firearm was believed to be in the suspect’s residence. SF, CSD and GVERT officers executed a search warrant for a unit in a multi-unit residential building in the 1000-block of Tillicum Road. The road was closed to traffic out of an abundance of caution. Officers located a loaded .40 calibre handgun and body armour in the residence.

The suspect was transported to VicPD cells. 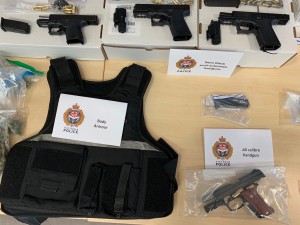 Strike Force officers are already working on their next investigation.

If you have information about those selling dangerous drugs in our community, you can call the Strike Force line directly call (250) 995-7260. Otherwise you are asked to call our non-emergency line at (250) 995-7654. To report what you know anonymously, please call Greater Victoria Crime Stoppers at 1-800-222-8477.