Victoria, BC – Officers are investigating a suspicious circumstance in Fernwood this afternoon and are looking to speak with a man who dropped off a toolbox at a Fernwood basketball court.

At approximately 12:30 p.m. on Thursday, April 30th, Patrol officers were called to a basketball court in the 1200-block of Gladstone Avenue for a report of a suspicious circumstance. Callers reported that an unknown man dropped the toolbox at the basketball court and left the area.

Patrol officers attended the scene and determined that the toolbox was suspicious. Officers with the Greater Victoria Emergency Response Team (GVERT) were called to the scene.

A photograph of the toolbox is below: 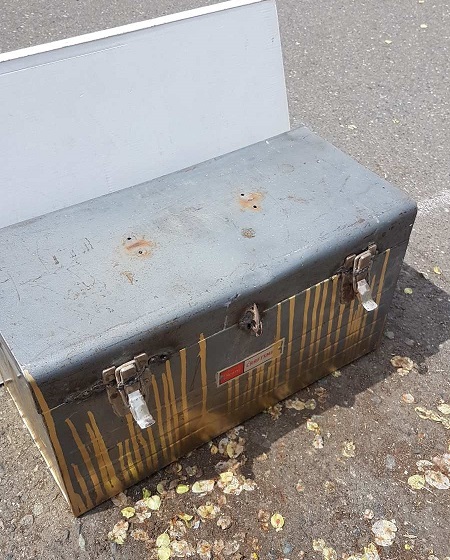 The man who dropped off the toolbox is described as a Caucasian man, with a brown beard and a long sleeve shirt. He drove a white vehicle, possibly a Mazda, and took the toolbox out of the trunk before leaving it at the basketball court.

Officers are interested in speaking with the man to determine the contents of the toolbox. We are responding out of an abundance of caution and are asking people to avoid the area at this time.

If you have any information about the toolbox, or the unknown man, please contact our non-emergency line at 250-995-7654. Please press #1 to speak with the report desk. To report what you know anonymously, please call Greater Victoria Crime Stoppers at 1-800-222-8477.

This file is in the early stages of the investigation. We will provide further updates as soon as we are able. A media rally point will be established and broadcast over Twitter.