Victoria, BC – Investigators are asking for public assistance in gathering information related to three suspicious fires which occurred overnight in James Bay.

At approximately 3 a.m. on Thursday, May 14th, Patrol officers were called to a suspicious construction bin fire near the intersection of Michigan Street and Powell Street. The Victoria Fire Department was already on scene and extinguished the fire. The construction bin sustained significant fire damage.

At approximately 3:05 a.m., while on scene at the construction bin fire, the officers were alerted to a second suspicious fire which was burning in the 500-block of Government Street. Officers attended the area and observed that the staircase of a heritage building was on fire. The Patrol officers contained the fire with a fire extinguisher. The Victoria Fire Department then attended and extinguished the fire. 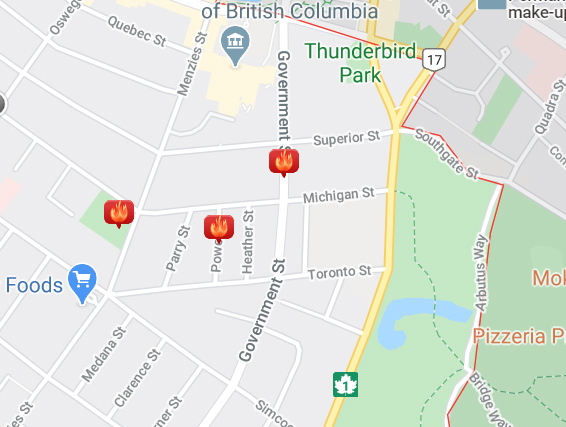 At approximately 3:10 a.m., Patrol officers received a third report of an ongoing fire in the 200-block of Menzies Street. Officers attended and observed a dumpster fully engulfed in flames. The fire spread to a nearby wooden fence, which the officer was able to contain with a fire extinguisher. The Victoria Fire Department attended and extinguished the remaining fire. A map of the fire locations is available below.

No one was injured as a result of these fires, however significant property damage occurred. All of these fires are considered suspicious and remain under investigation.

Investigators are appealing to the public for any information that you may have in relation to these suspicious fires. All of these fires occurred within a one-block radius of one another. If you live near the 500-block of Michigan Street, the 500-block of Government Street, the 200-block of Menzies Street, or surrounding areas, please review security camera footage for the time period between 2:30-3:30 a.m. on Thursday, May 14th.

If you have information about any of these incidents, you are asked to call our non-emergency line at (250) 995-7654. To report what you know anonymously, please call Greater Victoria Crime Stoppers at 1-800-222-8477.