Shortly after 3:30 a.m. on Monday, August 3rd, Patrol officers and a VicPD K9 team were called to a report that a man broke into a vehicle in the 100-block of Gorge Road East. The suspect broke a window in the vehicle and gained access to the trunk. He then fled the area. 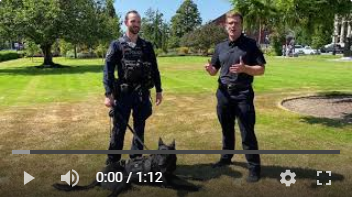 Patrol officers and the VicPD K9 team attended and began to investigate the incident. After gathering a description of the suspect, PSD Jonny was deployed along with his handler, and they began a search for the man. The VicPD K9 team tracked the suspect from the scene of the mischief to a hedge line near the intersection of Harriet Road and Chown Place. PSD Jonny located the suspect hiding in the hedge line at that location and PSD Jonny assisted as the man was taken into custody without incident. There were no injuries.

The man was transported to cells. This file remains under investigation.