Chief Manak, Investigative Services Division detectives and VicPD officers and staff joined with members of local media in honouring Fadil Rashead for his actions in helping bring court designated dangerous offender Scott Jones into custody. Accompanied by his family, Mr. Rashead was presented with VicPD’s Civic Service Award in our Hall of Honour this morning. 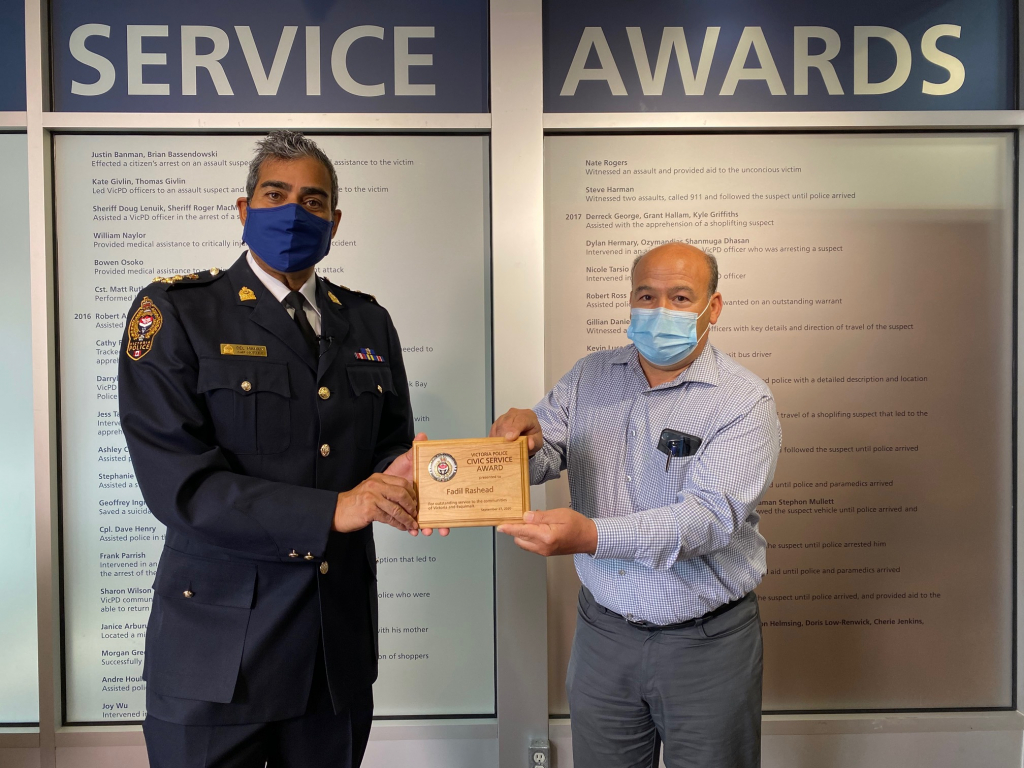 On September 27th VicPD officers were on the third day of searching for violent sex offender, Scott Jones. Jones, a court-designated dangerous offender, was wanted on a Canada-wide warrant for being unlawfully at large.

Our search had included dozens of officers and staff, alongside our partners with the RCMP and police officers in neighbouring communities. We had notified our community through Tweets, media updates and interviews, and through alerts on our VicPD Connect app, asking them to keep an eye out for Jones and to call us if they see him.

On Sunday, Mr. Rashead did exactly that.

Mr. Rashead, a driver with Blue Bird Taxi, picked up Jones and drove him to a West Shore retail store. There, Jones made an unusual request, asking Mr. Rashead to go into the store and buy him a change of clothing. Jones couldn’t go into the store, he said, because police were looking for him.

Mr. Rashead left Jones in his cab, and went into the store. But instead of buying Jones clothing, Mr. Rashead stepped up and protected his community, Mr. Rashead called 911.

West Shore RCMP arrived and took Jones into custody. Not before Jones attempted to light Mr. Rashead’s taxi on fire. Officers had to break a window to arrest Jones and put out the flames.

Jones was transferred to VicPD custody.

“On behalf of the Victoria Police Department, I want to extend my sincere thanks and appreciation for your commitment to your community,” Chief Manak said. “Mr. Rashead, thank you for doing the right thing. It is my pleasure to present you with the VicPD Civic Service Award.”

The VicPD Civic Service Award was created as a way to recognize community members who have stepped up and done the right thing in our communities. Mr. Rashead’s name will join the other awardees on the glass in VicPD’s Hall of Honour.