Victoria, BC – Patrol officers arrested three people and seized a replica firearm after a vehicle stop this morning.

At approximately 8 a.m. this morning Patrol officers were called to a multi-unit temporary housing facility in the 100-block of Gorge Road East for a report that a man pointed a firearm at another person. There were no injuries in the incident.

Multiple patrol officers attended the area and observed the suspect leave the scene in a vehicle. Officers stopped the vehicle in the 1500-block of Hillside Avenue and arrested three occupants, two men and one woman. Officers searched the vehicle and located a replica firearm.

A photograph of the replica firearm is below. 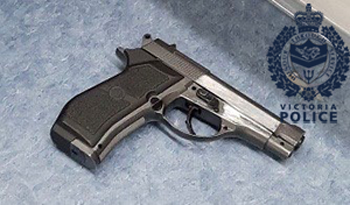 The man involved in the incident with the firearm was transported to cells and faces recommended charges of possession of a weapon for a dangerous purpose, pointing a firearm, and use of an imitation firearm in the commission of an offence. The other man and woman were released without charges.