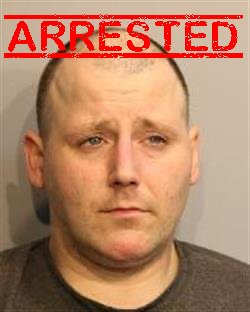 Michael Friesen was the subject of a wanted person notification early this morning. He was the subject of an unendorsed warrant for review of sentence in relation to offences such as fraudulent use of identification, unauthorized use of a credit card, and possession of stolen property for the purpose of trafficking. Investigators believed that Michael Friesen was actively evading police detection.

Shortly after the public notification, officers received a tip about the location of Michael Friesen. Officers then located Friesen in a suite in a multi-unit residential building in the 1300-block of Harrison Street. Friesen refused to surrender to police and barricaded himself inside of the residence. Members of GVERT attended the scene and officers continued to negotiate with Friesen to surrender.

After several hours of negotiations, Friesen surrendered to police shortly before noon. There were no injuries in the arrest.

Friesen was transported to cells where he was held to await court.

Thank you to members of the public who shared Friesen’s information and helped to resolve this file.