In July, Strike Force initiated a project targeting organized crime in Victoria. In the course of the months-long investigation, officers identified a supply chain of high-concentration fentanyl being trafficked locally.

On the afternoon of October 21st, Strike Force, working with GVERT, arrested a suspect associated to organized drug trafficking in the 0-block of Dallas Road. There were no injuries in the arrest. During the arrest officers seized one kilogram of high-concentration fentanyl.

Drug analysis by Health Canada revealed the seized kilogram to be an unusually rare, high-concentration of fentanyl.

“The subsequent analysis of this kilogram of a controlled substance by Health Canada confirmed it has a concentration of 90 percent fentanyl, which is rare, and extremely troubling,” said Acting Inspector Conor King, a provincially recognized drug expert. “Typically samples are found to contain on average 10 percent fentanyl. In 2019 only one sample in Canada tested above 75 percent. Unfortunately, in 2020, samples across the country are testing positive for greater concentrations of fentanyl, which is a concerning trend. Nationally, there have been seven samples tested above 75 percent this year. In the midst of an opioid overdose pandemic, the dangerously high concentration of this seized fentanyl, in this amount, would undoubtedly have resulted in more deaths.”

The wholesale value of this kilogram of 90 percent fentanyl is $140,000. The street value is over one million dollars. This is enough fentanyl to supply an estimated 495,000 lethal doses to our community.

A video and photograph of the seized fentanyl is below. 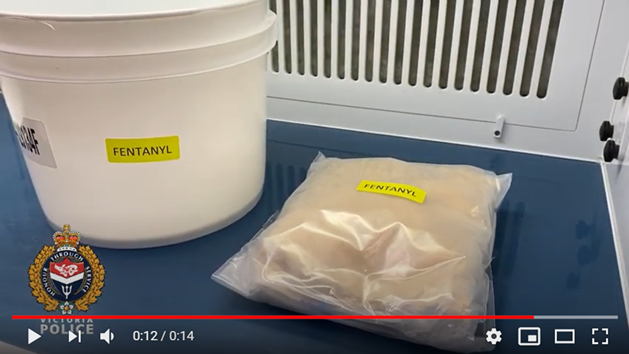 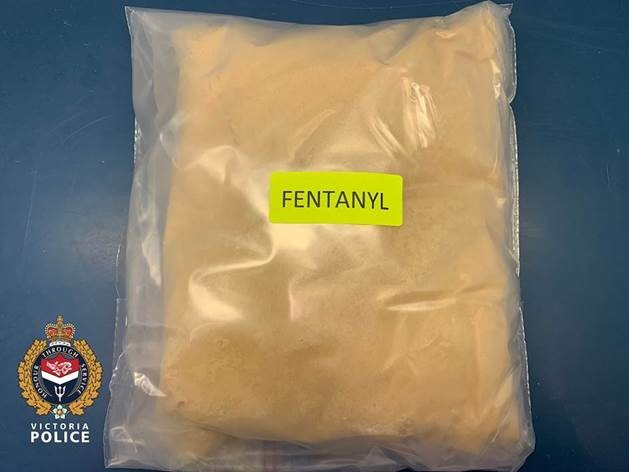 “This significant seizure of high concentration fentanyl comes in the midst of a provincial opioid crisis. Over 1,000 people have died in illicit drug deaths in British Columbia in 2020. Many of these deaths are the result of toxic drugs, like fentanyl, circulating in our community.  This crisis affects people from all walks of life, across all socioeconomic groups. It reaches into our high schools and into our homes. It kills our families and our friends. Make no mistake, we at VicPD join with police departments across B.C. in advocating for a safe supply for those who are living with addiction. This seizure supports those efforts. The targeted enforcement of drug traffickers associated to organized crime groups in our community is an important step in combatting the unsafe supply of these toxic drugs, ending the public health emergency, and saving lives.”

“The action by Victoria Police serves to bring focus to the other public health emergency happening in British Columbia, and our community is not spared. To provide a perspective on the gravity of the local situation, we are extending our toxic  Drug Alert for a second week for Victoria. Even more grim is that we tragically lose as many people to overdose in a single week on Vancouver Island than the total number of lives claimed since March by the COVID-19 pandemic. In fact, the pandemic has likely contributed to the resurgence in overdose deaths compared to last year.”

Strike Force relies on tips from the public. If you have information about drug trafficking or firearms in our community, you can call the Strike Force line directly at (250) 995-7260.