Victoria, BC – A Joint Forces Operation (JFO) between VicPD’s Strike Force and the Combined Forces Special Enforcement Unit of BC (CFSEU-BC) has resulted in a $30,000,000 seizure of drugs, including high-concentration fentanyl, weapons, and cash in Victoria and the lower mainland. Three men have been arrested.

On November 17th, Strike Force and CFSEU-BC officers conducted coordinated enforcement actions in Victoria and the lower mainland targeting the suspects in this investigation. 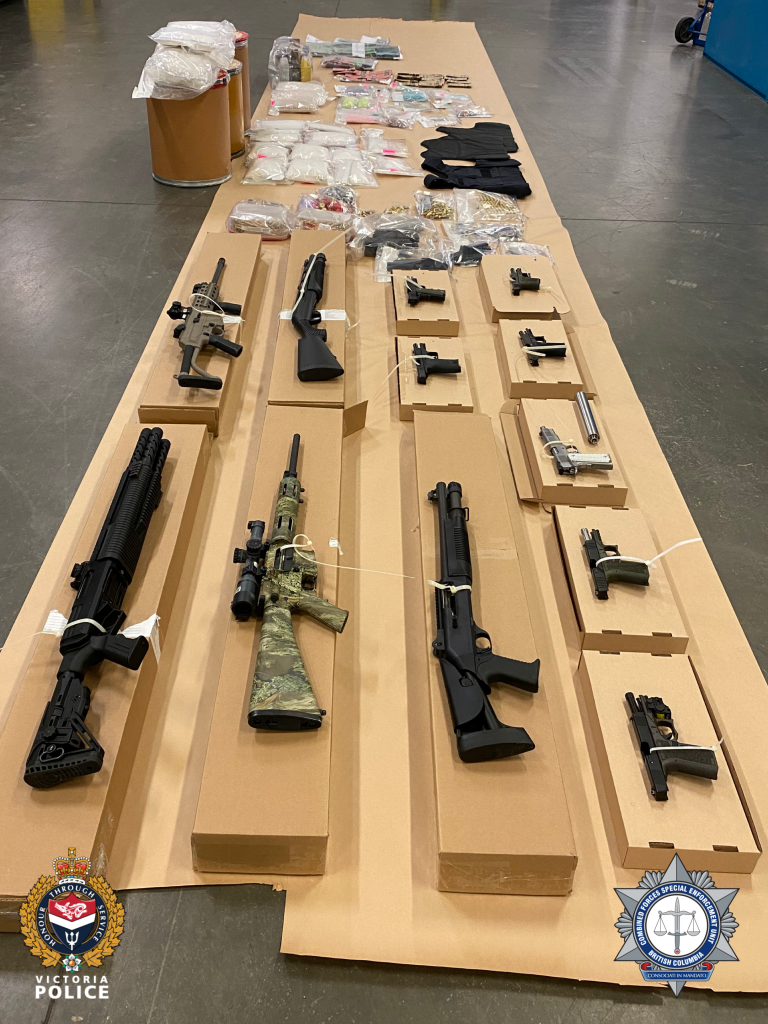 Firearms, fentanyl and other drugs, body armour and cash seized in Operation Juliet

The search of the locations in Victoria yielded over one kilogram of cocaine, over two kilograms of high-concentration fentanyl, over two kilograms of methamphetamine, and evidence of drug re-purposing and packaging for a trafficking operation, including over six kilograms of cutting agents. VicPD Strike Force officers also seized a replica assault rifle and $50,000 in cash. 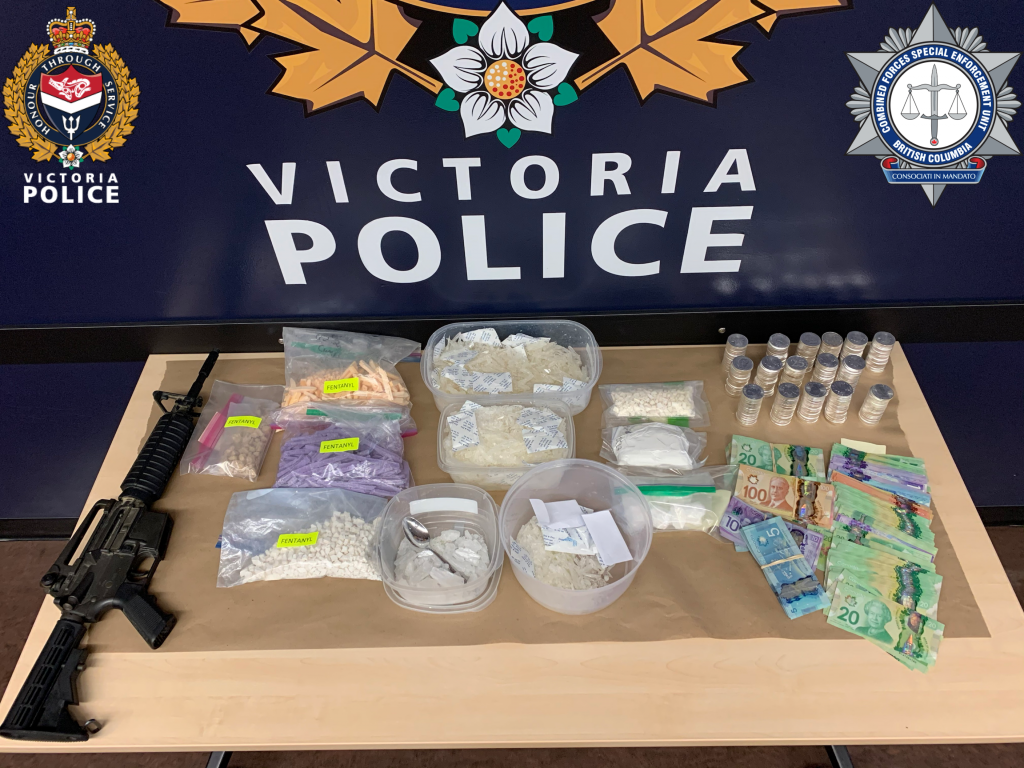 The search of the locations on the lower mainland yielded a kilogram of MDMA (which is commonly referred to as ecstasy), two kilograms of methamphetamine, over ten kilograms of high-concentration fentanyl, and evidence of drug re-purposing and packaging for a trafficking operation, including over one hundred kilograms of cutting agents. Officers also seized a kilogram of sildenafil (which is commonly known as Viagra). A substantial amount of bulk currency was seized from the lower mainland locations, currently totalling $335,390, along with three luxury vehicles. 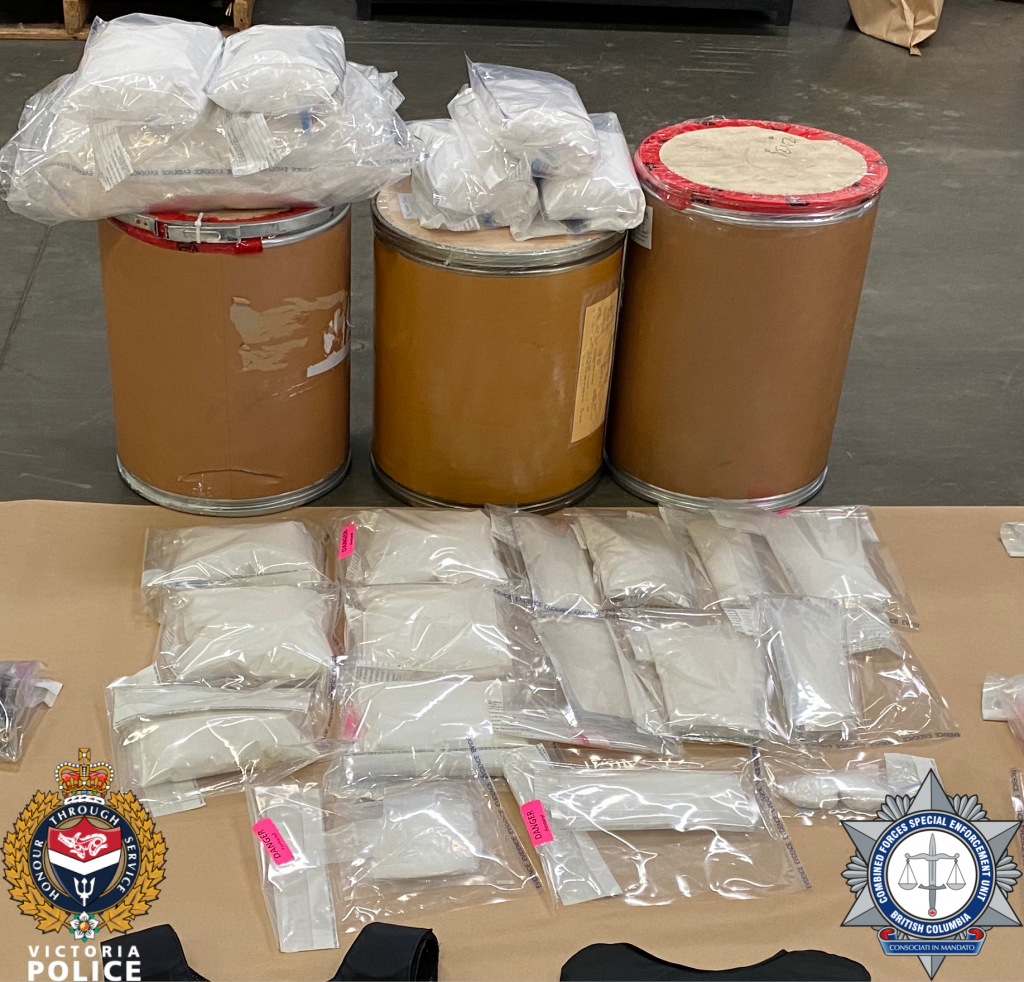 Firearms, including rifles modified for automatic fire, shotguns and pistols with “silencers” seized in Operation Juliet

On Friday, December 11th, CFSEU-BC executed an additional search warrant at a storage unit in the 1600-block of Lougheed Highway in Coquitlam. Investigators seized two additional sets of body armour as well as eight firearms accompanied by three suppressors, and multiple magazines and various types of ammunition. 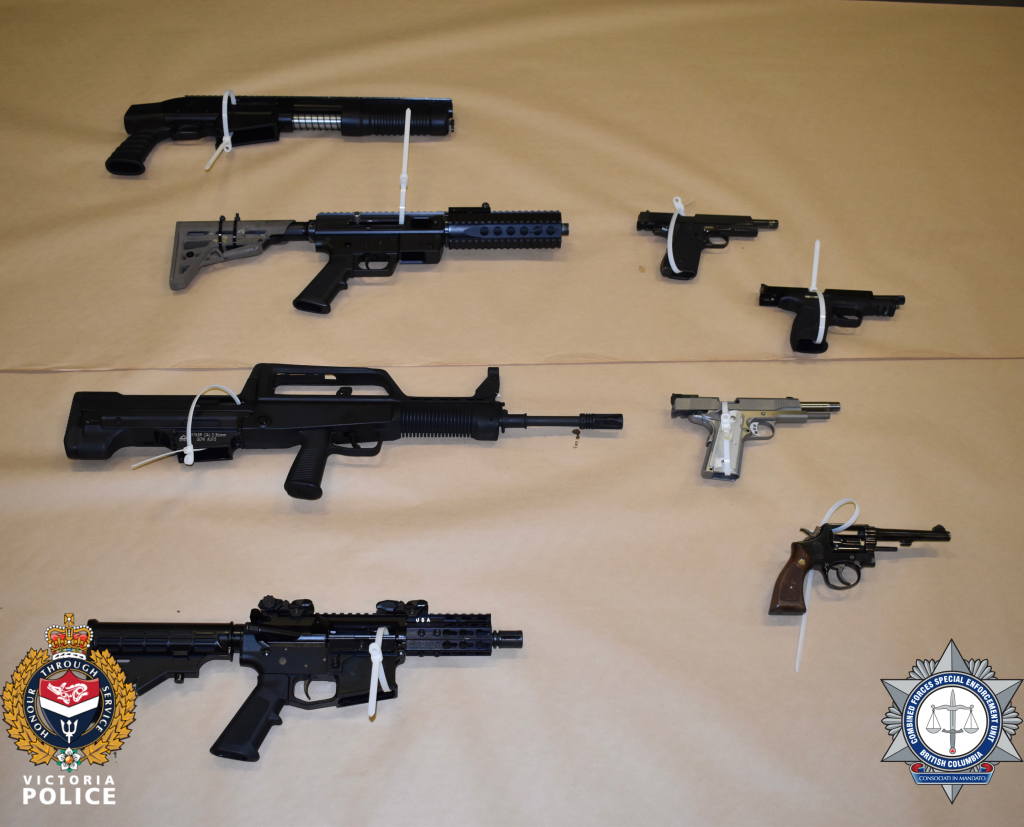 In total, officers seized 20 firearms in this investigation, ranging from pistols and shotguns to assault style rifles. Several of these rifles were modified to be fully automatic, and many of the firearms had serial numbers removed.

The estimated total street value of the seized cocaine, MDMA, methamphetamine, and high-concentration fentanyl in this joint operation is approximately $30,000,000.

The high-concentration of the bulk fentanyl enables massive profit margins when cutting the product down to millions of street level doses. The more than twelve kilograms of high-concentration fentanyl seized in total in this investigation is enough to supply an estimated 3,965,000 lethal doses. 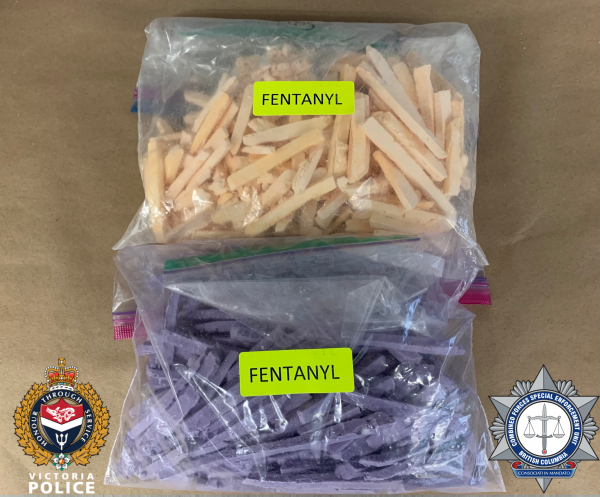 The investigation remains ongoing. Strike Force and CFSEU-BC will be recommending drug trafficking and firearms charges against one man from Calgary, one man from Surrey, and one man from Vancouver.

A video containing the evidence and comments from Chief Manak (VicPD) and Assistant Commissioner LeSage (CFSEU-BC) is available below. 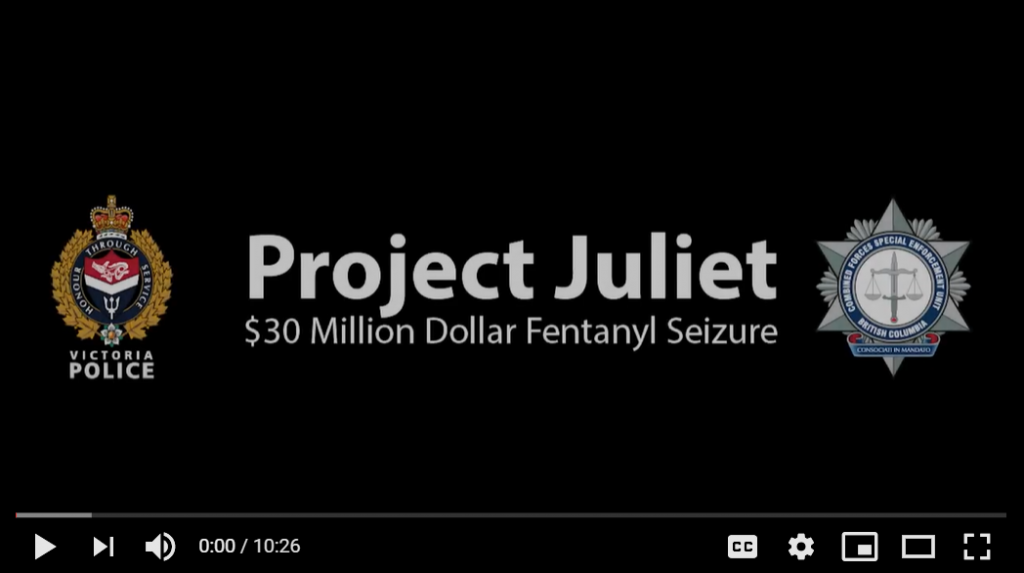 “I am so grateful for the partnerships we enjoy with agencies across our province, and this Joint Forces Operation with CFSEU-BC is such a prime example of the effectiveness of agencies working together in a united front to prevent deadly and poisonous drugs like fentanyl from hitting our streets. This file started as a VicPD investigation, with Strike Force identifying and targeting a criminal enterprise indiscriminately trafficking drugs for profit in our community. Strike Force and CFSEU-BC then worked together for months, conducting a complex, high-level investigation in an incredibly coordinated effort across various jurisdictions, and the results speak for themselves. When we talk about the scope of this project, this is the top of the fentanyl trafficking pyramid in British Columbia. This sends a strong message that police agencies are united across this province. We have a shared vision and every day we will continue to do the important work of making an impact against organized criminal groups in our communities. What is clear to us is that our work in this area is not done. The provincial opioid crisis continues to affect people from all walks of life, across all socio-economic groups. It reaches into our high schools and our homes. The tremendous outcome of this joint project is just one step in the targeted enforcement of drug traffickers harming our communities. We will continue to combat the unsafe supply of these toxic drugs, working to end the public health emergency and to save lives.”

“I want to thank Chief Manak and everyone with the Victoria Police Department for their significant contributions on this complex multi-jurisdictional investigation. Their efforts have not only assuredly saved lives in Victoria, the Capital Region, and Vancouver Island, but across the province by advancing this investigation to the point where we were able to seize large amounts of dangerous drugs and illegal firearms. I would also like to thank the Province of British Columbia for their funding and support of the Provincial Tactical Enforcement Priority initiative that helped fund this complex project. By providing dedicated funding and encouraging the continual sharing of information, the Province-supported PTEP model integrates municipal, provincial, and federal intelligence to support a target prioritization framework aimed at suppressing gang activity regardless of jurisdiction. While we can only speak to and disclose the preliminary results of this particular investigation, I am able to share that there have been dozens more investigations just like this one, by CFSEU-BC and our policing partners across the province, that have resulted in the seizures of guns and deadly chemical concoctions fortified with fentanyl. This investigation and others highlight the undeniable links between drugs, gangs and violence, all of which threaten the public safety of British Columbians. This coordinated work between police agencies in British Columbia has been going on despite the pandemic due to the dedication and ingenuity of our teams who have found safe and effective means to continue gathering evidence. The seizures made in this investigation, by both the CFSEU-BC and Victoria Police, have taken millions of potentially deadly doses of drugs off our streets and dozens of firearms. But our work is not done. CFSEU-BC is committed to our relentless pursuit of these people and the groups that they may be acting on behalf of. We will work tirelessly to hold the people targeted in this investigation accountable, but we are also continuing our efforts against others. My message to those who are involved in this deadly trade…we will do everything we can to catch you and see you prosecuted to the fullest extent before you kill more people and cause more misery in our communities.”

CFSEU-BC is the largest integrated police program in Canada and is British Columbia’s integrated anti-gang police agency. CFSEU-BC’s mandate is to target, investigate, prosecute, disrupt and dismantle the organized crime groups and individuals that pose the highest risk to public safety due to their involvement in gang violence.

Launched in 2017 by the Province of BC in response to the opioid crisis, CFSEU-BC’s Anti Trafficking Task Force (ATTF) is dedicated to proactively implementing enforcement strategies in consultation with various law enforcement partners in an effort to disrupt and dismantle the various levels of organized crime that pose the highest risk to public safety. The ATTF aims to target, investigate and prosecute groups and individuals involved in gang violence associated to the illegal trafficking of synthetic opioids and firearms in British Columbia.

Firearms, fentanyl and other drugs, body armour and cash seized in Operation Juliet

Firearms, including rifles modified for automatic fire, shotguns and pistols with “silencers” seized in Operation Juliet