Victoria, BC –Patrol officers are asking for your assistance as we work to locate and arrest Leonard Michael Lecreux, wanted on five warrants based on VicPD investigations. 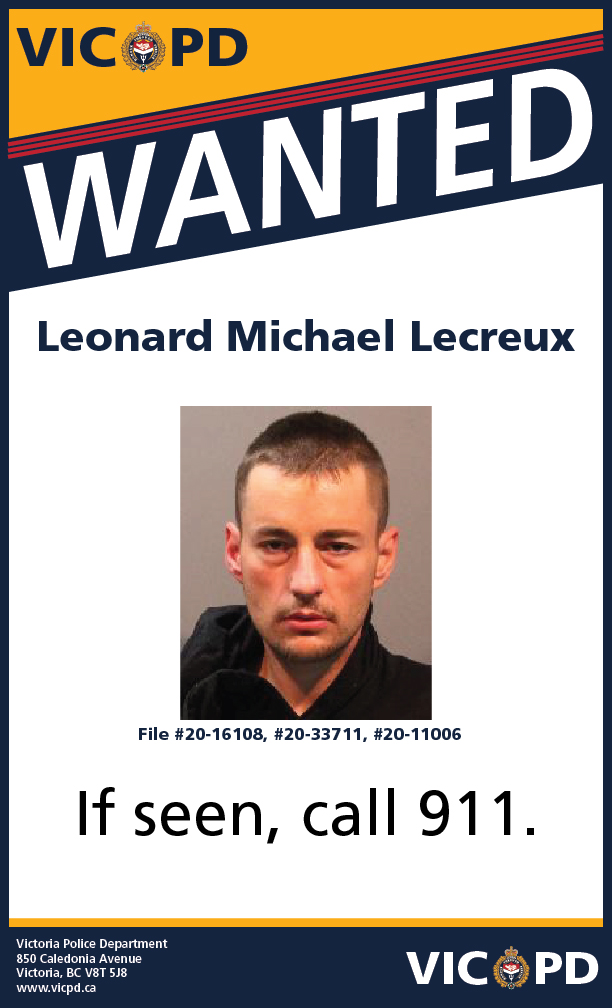 Examples of the files associated with Leonard Michael Lecreux’s charges are below.

On March 12, 2020, staff at a car dealership discovered that a 2020 GMC Denali had been stolen from their lot. The vehicle was disabled with the assistance of ONSTAR and located in the upper parking lot at Mayfair Mall. Surveillance video identified Leonard Michael Lecreux and another man with the vehicle. They were both arrested for the vehicle theft and released with a notice to appear in court.

On April, 17, 2020, staff at a school located in the 800-block of Bank Street called 911 to report that a man was outside the school with a knife and appeared to be cutting up drugs. Officers arrived and located Leonard Michael Lecreux nearby. A search of his person located break-in tools including a pry bar, drugs, a knife and a replica firearm as well as identification and credit cards belonging to other persons and a recent transaction receipt from one of the credit cards. These items were seized by investigators. Leonard Michael Lecreux was arrested for fraud and breaching court-ordered conditions. He was released with a notice to appear at a later date.

20-33711 | Possession of Stolen Property, Fail to Comply with Court-ordered Conditions

On August 23, 2020, Patrol officers were investigating a report of a break and enter to an underground parking area of an apartment building in the 700-block of Tyee Road. In this break and enter, several items were taken, including a unique bicycle. Patrol officers attended the 500-block of Ellice Street, where stolen bicycles have been recovered in the past, and located the stolen bicycle with Leonard Michael Lecreux. He was identified and arrested on outstanding warrants. A search of a fanny pack he was wearing when arrested revealed identification belonging to several different persons, credit and debit cards belonging to other persons, cash, a lock pick, and fentanyl. Leonard Michael Lecreux was arrested for possession of stolen property and for failing to comply with court-ordered conditions. He was held for court and released by the court at a later date.