Victoria, BC – VicPD Officers are remembering one of our own today. Constable John Curry’s End of Watch was Monday, February 29th, 1864.

Constable John Curry had left his native Durham, England and joined the Victoria Police Department in February of 1863. As was the norm, Constables at the time lived in the police barracks and carried out their duties without the use of firearms unless specifically issued by the Sergeant-in-Charge. Patrol duty in town did not merit the issuing of firearms while “specials and officers patrolling the outskirts, where there are burglars and dangerous characters, are provided with them.”

Constable Curry was on duty during the night of the 29th and was on foot in the area of the Store Street. He was in possession of information that a “break-in” had been planned somewhere in the area and had been instructed to keep a watch for it. Not in uniform, Constable Curry carried out his duties that night until he heard the noise of a commotion at what was at the time Mrs. Copperman’s Store, located on the north side of lower Johnson Street. Unbeknownst to him, night watchman Thomas Edmund Barrett had been attacked at his post at Mrs. Copperman’s Store after discovering an open door and realizing that a break-in had indeed occurred. Barrett had fought with two men inside and had been cut severely on the head.

After fighting off two assailants, Barrett rushed towards the rear of the building which was both the store and Mrs. Copperman’s residence, thinking that his attackers were fleeing out the back. The north side of the buildings and property ended at the Johnson Street Ravine that ran down towards the water where the suspects could easily have fled. In the confusion and darkness, Barrett met with Constable Curry who, likely hearing the commotion, had come up from the ravine. Barrett saw a figure charging through the darkness and in his mind, it was one of his attackers come back to continue the assault. Armed with a pistol, Barrett called out “stand back, or I’ll shoot!”

Barrett fired once, hitting Curry in the right side. Barrett frantically blew his whistle and on the attendance of yet another officer, examined the fallen man, discovering that it was Constable Curry. Curry was propped up against an adjacent building and was asked if he had hit Barrett. He replied, “I struck no man.”

He died at the scene.

Constable John Curry was the second police officer in the Victoria Police Department’s history as well as the second officer in B.C. to lose his life while in the service of others. He had served barely one year.

The Coroner’s Inquisition into John Curry’s death of came back with a verdict of Justifiable Homicide in that Barrett “was an officer paid to protect property and not to run” and recommended in future that police use a system of special passwords to prevent such tragedies.

Constable John Curry’s grave is located in the “Old Burying Grounds”, now known as Pioneer Park, although the exact site has long since been lost. He had no family in Canada and his family in England has never been located. 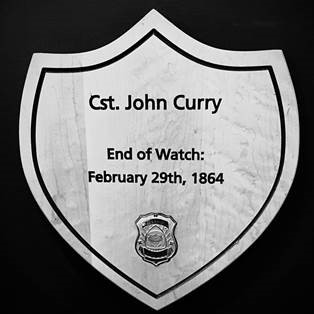