The 2020 CSI has a new format this year, marking the first time that CSI numbers are available separately for Victoria and Esquimalt.  While VicPD provides policing service to both Victoria and Esquimalt according to each community’s unique needs, previous CSI measures published by Statistics Canada were for both municipalities combined.

“The newly released Statistics Canada data reflects a severity of crime in the City of Victoria that is unacceptable,” Chief Del Manak said. “Our department is committed to doing everything we can to reduce Victoria’s crime severity index, and I look forward to working with our partners in the region to achieve this goal. Despite these challenges, I am proud of the work of our officers who continue to respond to a number of high-priority, resource-intensive calls on a daily basis with an unwavering dedication to public safety. Moving forward, the separation of the Statistics Canada data for Victoria and Esquimalt will help us better identify the work that lies ahead, while highlighting areas of success, such as the valuable community-based policing approach in Esquimalt.” 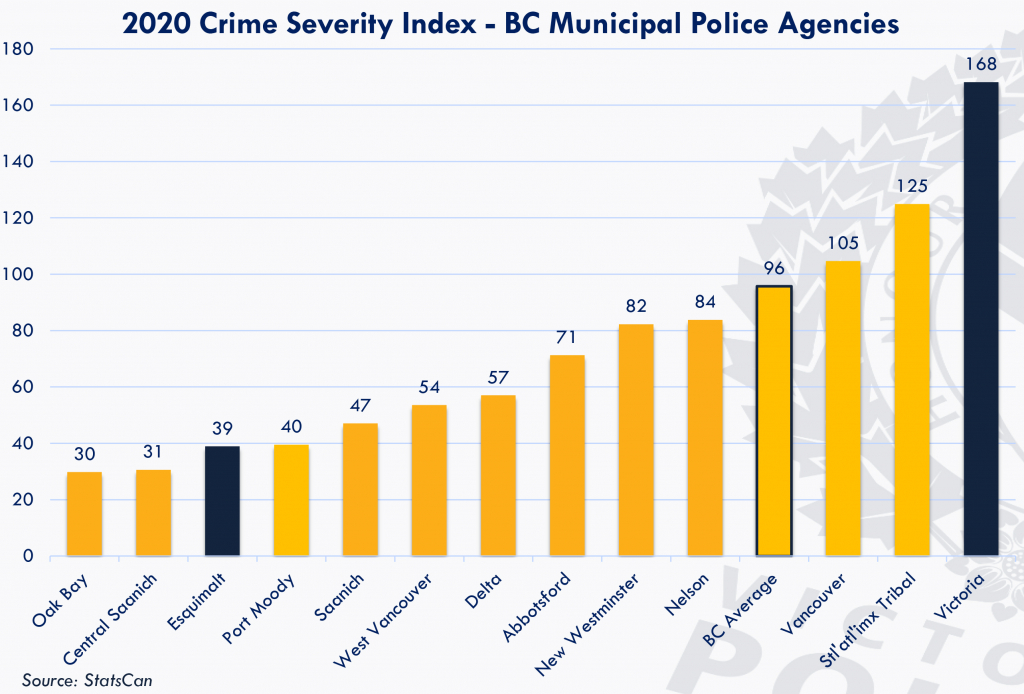 The Victoria Census Metropolitan Area’s CSI for 2020 is significantly lower than Victoria’s 2020 CSI.  The difference between these measures is indicative of the concentration of activity in the City of Victoria. As the downtown core for the region, the City of Victoria is challenged with higher numbers of calls for police service, more social disorder concerns and a population with higher needs when compared to the surrounding primarily suburban municipalities.  As the jurisdiction with the highest urban density in the region, the largest number of liquor seats, the significant majority of multi-unit residential temporary housing facilities, and being the provincial capital of BC, Victoria is a unique, urban policing environment.  The Victoria Police Department has long supported amalgamation with other departments in the region in an effort to unify the resources needed to resolve the ongoing reality of public safety in the region.

The change to separating the Victoria and Esquimalt CSIs required a change in our current VicPD Community Dashboard, which has been updated accordingly, including additional details related to StatsCan’s release of information such as the Violent CSI and Non-Violent CSI figures for both Victoria and Esquimalt.  Future Community Safety Report Cards, beginning with the Q2 2021 report card (scheduled to be published in August), will also be amended.  To maintain transparency, the previous “combined” CSI data for VicPD’s jurisdiction of Victoria and Esquimalt will continue to be available as an online archive in both the VicPD Community Dashboard and future Community Safety Report Cards.