Victoria, BC – Officers are requesting your help as we assist Vancouver Police Department investigators in locating a man wanted on a Canada-wide warrant.

Jesse McMullen is a described as a 26-year-old Caucasian man with extensive, distinctive tattoos. He stands five feet, seven inches tall and weighs 160 pounds, with an athletic build. Jesse McMullen has spiderweb and skull tattoos on the top of his head, a full neck tattoo with a shamrock over his throat, “family” tattooed on his chest and skulls on both forearms. He has blue eyes and often has a shaved head or short brown hair. He was last seen wearing a black jacket, a blue t-shirt, blue jeans, dark-coloured running shoes and a black toque. He has previous convictions for armed robbery, robbery, assault, escaping custody and possessing weapons for a dangerous purpose.

A photograph of Jesse McMullen is below. 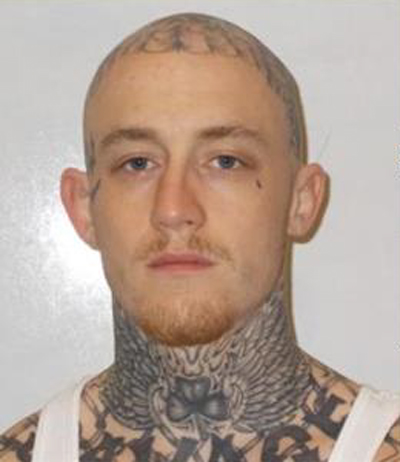 Jesse McMullen is wanted because he did not return to a community residential facility in Vancouver. However, he has previous connections to Victoria and may have travelled here. He is associated to a blue 2008 Mazda 3 with B.C. license plate NB2 77S.

Call 911 if you see Jesse McMullen.