Victoria, BC – A man was arrested after he dropped a loaded handgun and fled into a family’s home yesterday afternoon.

Just after 1:30 p.m. yesterday Patrol officers were in the 2600-block of Dowler Place when they observed a group standing outside a series of townhomes. When the group saw the officers, a man in the group turned and started to walk away. As he was walking away, the man dropped a handgun. The suspect then fled towards the townhouses. Officers called for additional units and gave chase on foot.

The suspect ran into a nearby townhome that was occupied by a family unknown to him. The family, consisting of a mother, father and two young children were in the residence at the time.

When he entered the home, the suspect reportedly encountered the mother in the front hallway and pushed her out of his way. The father, who was in the kitchen, confronted the man while the mother recovered herself and grabbed her youngest child who was nearby. She leaped out a first floor window to safety with her child in hand. While the father fought with the suspect, the mother handed the child off and then re-entered her home to rescue her other child who was in an upstairs bedroom. The father continued to struggle with the suspect and succeeded in throwing the man out the back door into the back yard. The suspect then leaped the backyard fence into a neighbouring yard.

Additional Patrol officers arrived and entered the backyard area where they initially encountered the father. He was briefly held at gunpoint as officers worked to locate and identify the suspect. The father pointed officers to the suspect’s location in the next yard. The suspect was then taken into custody at gunpoint without further incident.

The suspect was transported to hospital for non-life-threatening injuries received during his fight with the father. The father, mother and two children were not physically injured.

Officers recovered the handgun and discovered that it was loaded when dropped by the suspect. 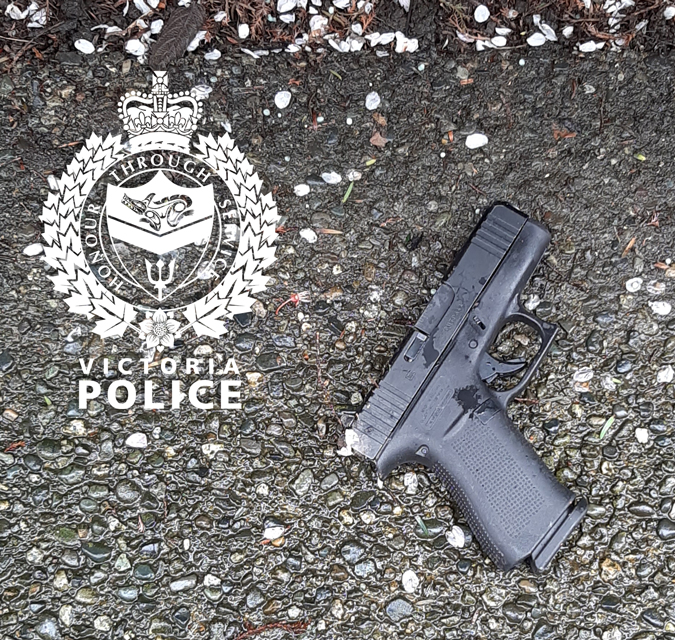 This incident remains under investigation. If you have information about this incident and have not yet spoken with officers, please call the VicPD Report Desk at (250) 995-7654 extension 1.