Victoria, BC – Fully staffed James Bay local vehicle traffic only access points will return to the area near the B.C. Legislature on Saturday, April 2nd, 2022, in anticipation of potential planned protests. 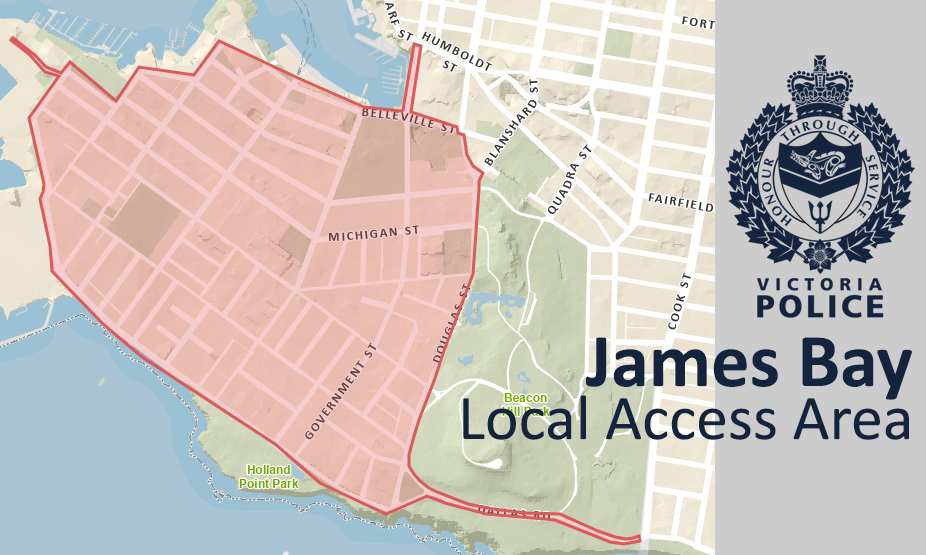 Vehicle traffic was restricted in James Bay on Saturday, March 19th, in anticipation of planned protests and potential blockades. VicPD’s increased response was a result of eight weeks of continuous disruptions involving vehicles, “slow-roll” blockades and the use of horns, including modified air, train and ship horns, which had a significant and unlawful impact on residents and businesses in James Bay and the B.C. Legislature area.

While vehicle traffic has been restricted in James Bay since March 19th, officers have facilitated access to the area by foot, bicycle, taxi and B.C. Transit, as well as vehicle access to local residents, businesses, those attending religious services and visiting friends and family. During this time people have been able to attend the B.C. Legislature to gather and protest. There have been two weekend events with several hundred in attendance which included significant marches through downtown streets, as well as small, daily protest gatherings.

Since the James Bay local vehicle only access area went into effect we have had non-local vehicles attempt to access the area. This occurred each day last week, requiring daily staffing at the access points.  Over the last few days fewer and fewer vehicles have attempted to gain access to the area. In order to minimize the disruption for James Bay residents and businesses while ensuring public safety and facilitating an environment for safe, peaceful and lawful protest, VicPD has responded by moving to a relaxed posture, with VicPD Traffic, Patrol and other officers conducting mobile patrols in the area.

We also continue to communicate with protest organizers with the goal of minimizing disruption to the public while facilitating their right to safe, peaceful and lawful protest.

VicPD supports safe, peaceful and lawful protest. Dangerous and/or unsafe activity will continue to be met with de-escalation and enforcement.

In addition, our temporary, monitored CCTV cameras remain in the area of the B.C. Legislature. These cameras are deployed in keeping with B.C. and Federal privacy legislation. The cameras will be taken down once the protest events have concluded.

If you have concerns about these road closures or our CCTV camera deployment please email [email protected].