Victoria, BC – Patrol officers arrested a woman and seized a replica firearm today after responding to a report that she randomly chased a man, fired a pistol at him, and damaged his vehicle.

At approximately 11:32 a.m., VicPD officers responded to a report that a woman had fired a handgun at a man, who had fled to his parked vehicle in the 600-block of Queens Avenue. The man reported that he had been walking in the 600-block of Queens Avenue when he was randomly followed by an unknown woman. The woman then brandished what appeared to be a pistol and fired it at the man.

The man sought safety in his vehicle. The woman then struck the man’s vehicle and damaged it.

Multiple officers responded to the call while receiving additional information that the woman had then fled the area to the 700-block of Queens Avenue, and that the firearm may have been a replica.

Officers located the woman inside a tent in a parking garage in the 700-block of Queens Avenue. Officers gave voice command to the woman, who exited the tent and then began to walk away from officers. Officers took the woman to the ground and worked to take her into custody. She struggled with officers, but was arrested a short time later. Officers seized a replica pistol from the area of the tent.

The victim was not physically injured. The replica pistol did not contain ammunition. A photograph of it is below. 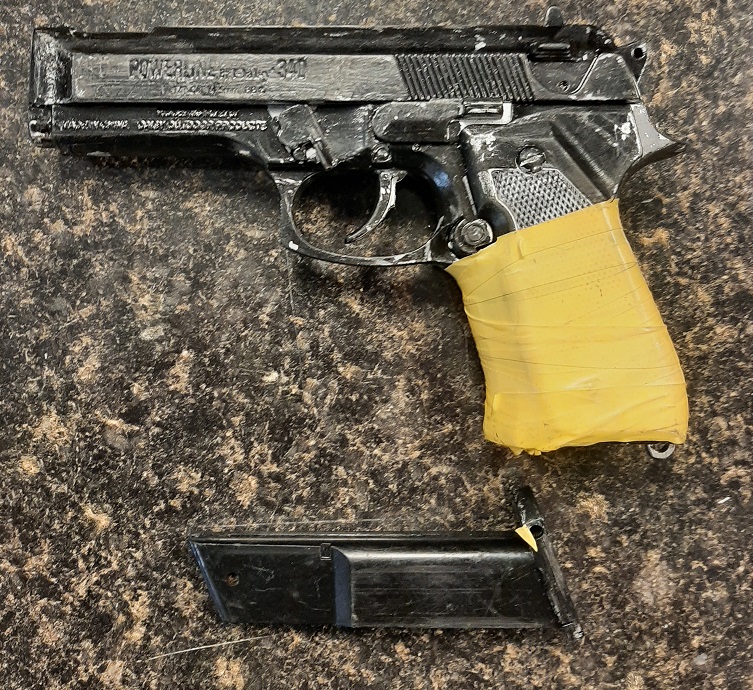 The woman was transported to VicPD cells. She faces recommended charges of possession of a weapon for a dangerous purpose, mischief, and failure to comply. The woman remains in police custody.

This file remains under investigation. If you have information about this incident and have not spoken with investigators, please call 250-995-7654 ext 1. If you wish to remain anonymous, please call Greater Victoria Crime Stoppers at 1-800-222-8477.