Victoria, BC – Investigators are asking for your assistance as we search for wanted man Shawn Sevigny.

Shawn Sevigny, who has a history of criminal convictions for violent offences, including assault with a weapon, forceable confinement, armed robbery and extortion, cut off his ankle monitoring bracelet in the 500-block of Johnson Street on Wednesday, August 30th. Shawn Sevigny also has convictions for drug trafficking, possession of stolen property and flight from police.  A BC-wide warrant has been issued for his arrest and officers from various sections, including Patrol, the Community Services Division, Investigative Services Division and the Integrated Canine Service (ICS) are working to locate and arrest him.

Shawn Sevigny is described as a 37 year-old Caucasian man, standing six feet, one inch tall with a medium build, weight approximately 180 pounds.  He has light brown hair that is shorter on the sides and longer on top and is often worn brushed forward. He recently wore a light brown goatee and has brown eyes. His tattoos include a dragon on his left forearm, a flaming skull on his right upper arm, and Japanese script on the back of his neck.

A photograph of Shawn Sevigny is below. 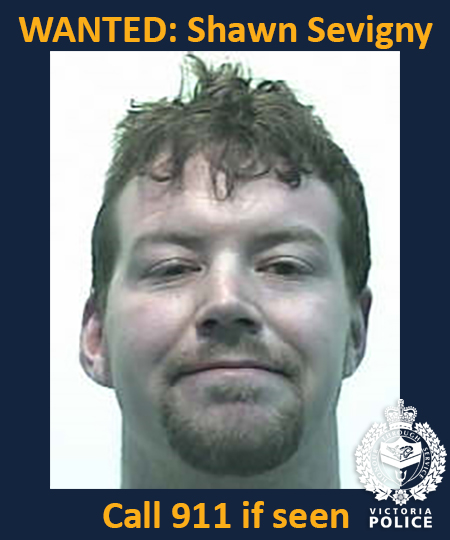 If you see Shawn Sevigny, call 911

If you see Shawn Sevigny do not approach him. Call 911.