Victoria, BC – Today, VicPD remembers the sacrifice of Constable Albert Ernest Wells, who died on December 19, 1927, from injuries sustained in the line of duty.

At the same time, an automobile was speeding along Quadra Street. Constable Wells attempted to avoid a collision, but the vehicle struck Constable Wells’ sidecar and he was thrown from his motorcycle.

Seriously injured and unconscious, Constable Wells was taken to the drug store at Quadra Street and Hillside Avenue while he waited to be transported to the hospital.

The driver of the speeding vehicle left the scene of the collision. He was later arrested and charged. 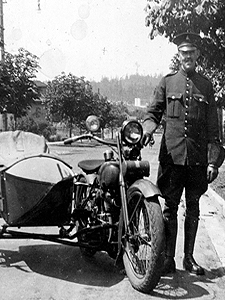 Constable Wells was buried in Ross Bay Cemetery. He was married and had two small children at the time of his death.

Constable Wells was born in Birmingham, England and immigrated to Canada after World War 1. Constable Wells had been a member of VicPD for two years and nine months.