Victoria, BC – An impaired driving stop early Sunday morning led to a 24-hour driving prohibition and an unauthorized entry to a police vehicle – an entry which was caught on video.

Just before 2 a.m. on Sunday, January 15, Patrol officers were flagged down by a driver who was concerned about the operation of a nearby vehicle. The concerned driver told officers that the suspect vehicle had driven through two red lights. They were concerned the driver of the erratic vehicle was going to injure someone.

Officers conducted a traffic stop in the 500-block of Kingston Street and noted that the driver displayed clear signs of impairment by drugs. An officer issued a standard field sobriety test demand to the driver who initially started the test, but then refused to continue, resulting in a 24-hour driving prohibition and their vehicle being towed.

When a supervisor on scene returned to his vehicle, he discovered that a subject had made an unauthorized entry to his police vehicle. 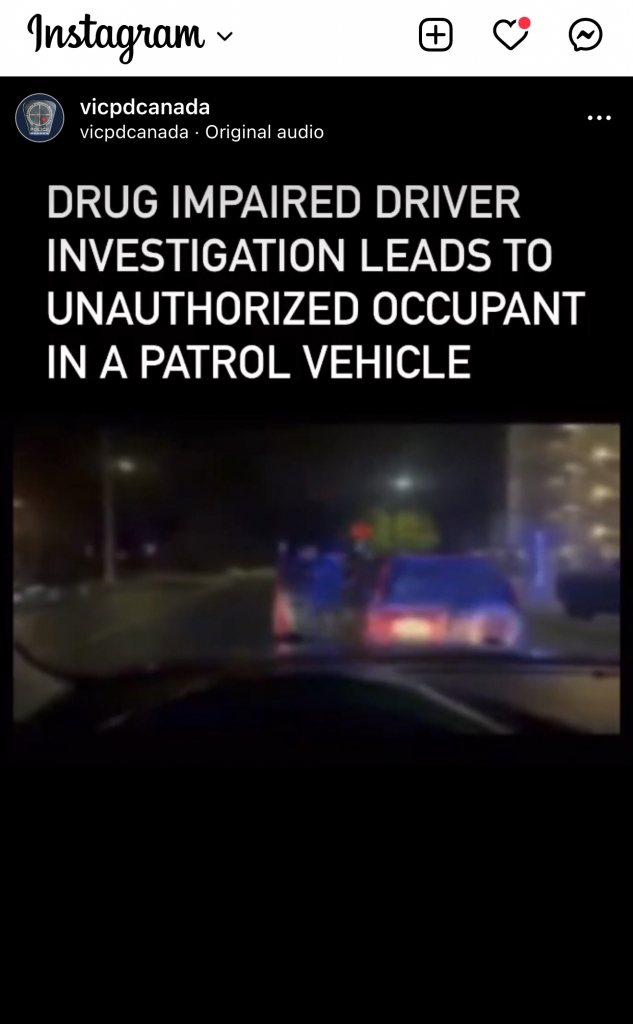 Officer confronts an unauthorized occupant in his vehicle

The unauthorized vehicle entry occupant was released roadside without charge.

VicPD officers continue to search for drivers who are impaired by alcohol and other drugs. If you are using drugs or alcohol, do not drive. Take a taxi, use transit or plan for a designated driver. Even having your vehicle towed home is a safer and significantly cheaper alternative to an immediate roadside prohibition, criminal impaired driving charge or harming or killing someone. Do not drive impaired.

If you suspect someone is driving while impaired, call 911.