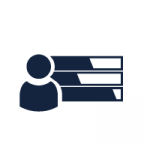 Measuring the case load per officer is a common method by which police agencies can be assessed for work load and demands on police officers. For example, it is a key metric reported annually by the BC Government report Police Resources in British Columbia. This chart shows the case load for VicPD officers, which is the total number of cases divided by the authorized strength of police officers at VicPD. The chart also offers the provincial case load average for municipal police agencies in British Columbia.